The stories we tell ourselves 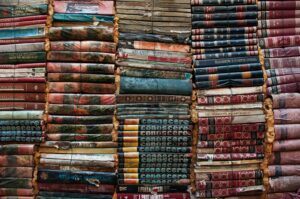 I’ve been thinking about the stories I tell – those of ancient, sacred women who have been absented from our known-and-relied-upon lineage.

I think about them all the time, truth-be-told, but in the past couple of weeks, while working away on Readings and being deeply “with” them, I’ve had another thought:

The degree to which we are supported by the stories of strong and amazing women who have gone before us – the shoulders upon which we stand – is directly related to the quality of the stories we tell ourselves.

The stories we tell ourselves, the ones we live (too-often filled with self-contempt, shame, and silence) are directly related to the absence of stories of strong and amazing women – those in our lineage – who refused all of these realities and then some.

When the stories we learn as young girls include Cinderella, Sleeping Beauty, even Eve – we incorporate beliefs about ourselves because of such. They’re subtle. Subconscious even. Until they aren’t.

It’s not surprising that we struggle with a messy soup of assumed-truths that include “someday my prince/ess will come,” “someday I will awake from this sleep only to find all my dreams fulfilled,” and “its my own fault I’m living in this East of Eden reality.” It’s not surprising at all – given what even these three stories affirm and teach!

Let’s work only with Eve here for a minute…

When you were growing up, what if you learned of her as a bold risk taker? A woman who followed her desire, no matter the cost? The first woman in this recorded text to actually speak of her beliefs, her ideas, her understanding of the divine? A woman whose courageous choice enabled the furtherance of an amazing world?

There’s nothing in that telling that would ever lead you to self-contempt or shame; certainly not silence. Instead, you would have learned to honor and trust risk-taking, your own desires, your own beliefs, and your own choices.

Here’s the good news, as I see it:

If the way one woman’s story has been told (whether Cinderella, Sleeping Beauty, Eve, or countless others) has had the power to shape everything, then the way that same story is reimagined, redeemed, and retold has the power to do the same.

And that is good news!

The same is true for your story: those tales you’ve been telling yourself, believing about yourself, holding on to like they’re sacred writ? They can be reimagined, redeemed, and retold, as well.

And even more good news?

When we retell, the old stories – like Eve’s and so many more – we realize that we’re not alone…that we never have been…that we stand on the shoulders of a long and illustrious lineage of strong and amazing women who offer us all the advocacy, wisdom, and grace we desire and deserve.

No surprise that this is what I do.

[Photo by Jan Mellström on Unsplash]