The power of women’s stories…of YOUR story

There’s an old, old story told that begins with a narcissistic, paranoid, and power-hungry man (which sounds vaguely familiar); an Egyptian Pharaoh who was worried about the slave population growing too fast. So he issued a decree that all newborn sons were to be put to death (as though it were up to him: the choices women made). And who was to carry out this ridiculous and violent rule? Yes, women. He mandated that the midwives in his employ would make sure the deaths happened – the very women whose sole purpose was to make sure life happened.    Two of those midwives decided that their principles, their ethics, their choices mattered more than his, so they ignored his mandate – not willing to participate in genocide. They continued their work. They stood alongside women, reminded them to breathe, wiped the sweat from their brows, talked them through their pain, and placed their children – no matter the gender – into their waiting arms.  At one point, the two of them were brought before the Pharaoh – now even more red-faced and angry than before (which also sounds vaguely familiar). “How is it that the slave population continues to grow? Did I not say that all the boys were to be killed?” Without missing a beat, the two of them explained that the Hebrew women were not like Egyptian women. “They are too quick! They give birth before we even get to their home!”  The story ends by saying that “…the people multiplied and increased greatly.”

If I were preaching a sermon (which, admittedly, I sort of am), here’s my first point:

Women’s advocacy, friendship, and support for one another changes everything. Everything!

I suppose it’s possible, even probable, that one midwife could have stepped out of line on her own and saved a generation of humans. But the fact that she didn’t have to, that she wasn’t alone, is what makes this story so powerful. Together, the two of them let the baby boys live…which caused the Israelite nation to keep growing…which created the conditions for an entire nation’s escape from slavery to liberation. These two women did this! Their advocacy for one another. Their friendship. Their support. In the face their courage and integrity, the Pharaoh didn’t stand a chance. Not really. Not ultimately. These two women (who are rarely, if ever heard of) changed everything.

We have the same capacity, you know. We are advocated for, befriended, and supported by the women we know and love. Even more, we are accompanied by the generations of women upon whose shoulders we stand – including the two midwives.

We are not alone! Ever.

And with this much beauty, power, and wisdom in our corner, what can’t we change?

One more point (I’m making myself stop at only two):

The stories of women (even when unknown, unheard, uncelebrated) are what enable the possibility of so many more yet to come.

At about the same time of this story, another one was taking place. A baby boy was born. His mother, understandably afraid that he would be killed, put him in a basket made of reeds and let him float down the river – hoping that he would be rescued and given safety. Her hope was fulfilled when the Pharaoh’s daughter, bathing in the river, happened to see the basket and rescued the baby. Though that boy grew up in affluence and privilege, he could not ignore the ongoing mistreatment and oppression of the Hebrew people. He left his position and power behind – leading their rebellion and escape. His name was Moses. Maybe you’ve heard of him? The parting of the Red Sea. The 10 Commandments. And a few other juicy tales…

Of course not, but that’s the point. The stories of women, the ones we know and perhaps even more, the ones we don’t, are what enable the stories that are yet to be told. 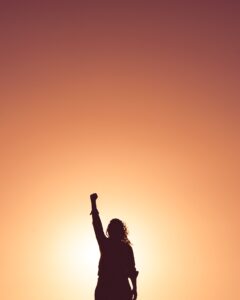 When we know these stories – the strength, courage, and beauty from which we descend – we begin to recognize just how powerful we are, the ways in which we shape the future of all that is yet to come, the way in which we have the capacity to change everything.

Imagine all that you are yet to do – companioned by such a legacy of women; living your own story in ways that will champion so many more yet to come. How amazing are you? (I already know the answer.) And it’s only Monday!  May it be so. [Photo by Miguel Bruna on Unsplash]