A crossroad, a cliff’s edge, & decisions 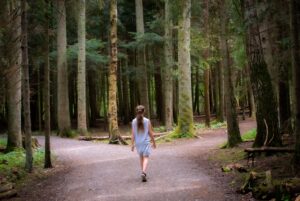 Over a lifetime, we find ourselves at crossroads: a relationship, a marriage, a divorce, a career decision, a location change, health issues, endings, beginnings… When peering over the cliff’s edge of a decision, we often feel as though few-if-any options exist. We feel stuck, lost, torn, frustrated, anxious, afraid, any number of emotions. (Or maybe it’s just me.)

We look into the unknown future and wish for an answer. But we need not look so far, so hard, or so wistfully to find one. The answer(s) are closer than we imagine or believe. They are already within. They are always within.

Just in case you’re not hearing them or not certain I’m right about this, here are three “answers” to apply at your crossroad, your cliff, your dark night of the soul. They’re trustworthy, I promise. (And I’ll tell you where they came from in a bit…)

Sometimes ‘no’ is the right thing to say.

I know: you’ve been trying to get to a ‘yes.’ You’ve been looking for a middle ground, some kind of give that will allow you to stay, to manage, to make it work. ‘Yes’ is the answer others expect you to give (almost as though they’d never considered you’d say anything other). But what if the answer needed here – and the one that will create the clear path forward – is a definitive ‘no’?

Say no to circumstances that cause you to second guess your values, your strength, your integrity, your voice. Say no to people who push you to give in, to come around, to agree with their way of thinking, their perspective, their feelings. Say no to situations that harm. And say no, unequivocally and with great haste, to the anything that deserves our firm and unyielding response: racism, sexual trafficking, domestic and child abuse, gun rights… The list is long.

Listen to the wisdom (I promise) is within. Then give yourself permission and claim the authority to say ‘no.’ Sometimes it is not only the right thing to say, it’s the only thing to say.

Do not misunderstand me: I am clear that these are huge decisions with vast consequences. In such places, much grace must be extended – to ourselves, to be sure, and to women we know who are struggling. Perhaps our role, for self and others, is to remind ourselves that we deserve no compromise, that we deserve the reality that eludes, that we deserve dignity and clarity of mind and the strength to stare over the edge of that cliff and then leap…

Do not compromise. But if that’s not feasible, at least not yet, know that you are worthy of living a life that does not require or demand such of you. Ever.

Choose yourself – always no matter what.

I know: completely counterintuitive to what most of us were raised with, socialized into, and what feels our very nature. But as above, things are not mutually exclusive: choosing yourself does not mean that you cannot choose another. The point here? Do not not choose yourself – ever – no matter what.

There is an old story told about a beautiful woman whose husband, the king, was about a week-deep into a party with his advisors and staff. At one point in the debauchery, he called for her, commanding that she show her beauty to his guests. Some versions of this story say he wanted her to come dance for them, others say she was to parade before them completely naked. No matter the details, she was faced with a decision. (Before going a step further, let’s acknowledge that to the king, there was no decision here. She wasn’t asked. She wasn’t conferred with. No one even considered this a choice. ‘Sound at all familiar?)

And still, she said no.
She refused to compromise (herself).
She chose herself, that time, always, no matter what.

So what happened? As you might imagine, the king was enraged. He met with his advisors and staff to see what they recommended. Their brilliant answer: “Her behavior might negatively influence our wives and all the women in the kingdom. Best to make an example of her so that they don’t get any ideas.”

The queen was banished. But not before the wives did get other ideas. I have to believe that her ‘no’ reverberated through the kingdom and that nothing was ever the same again. Because that is the power of a woman’s will, a woman’s ‘no,’ a woman’s knowing. No matter what.

This is what all of us need to witness and believe in order to turn the tide: examples of other women who have done what we need to do, want to do, must do. Not shiny examples in which everything gets better (though those are VERY nice to hear); rather, ones in which the costs are swift and exacting and it’s still clear that her decision was the only choice and the right one. We must champion a world in which saying ‘no,’ hardly merits punishment – rather, celebration; where any form of compromise seems laughable, a non sequitur; where choosing ourselves is simply, always, obviously, the best and only thing to do.

Nothing more was ever heard of the queen, but that was hardly her story’s end. In fact, her choice created the conditions for another woman to take the throne. And that woman eventually saved an entire nation of people from genocide.

In her story, just like her predecessor’s, her ‘no,’ her unwillingness to compromise, and choosing herself rippled throughout history, changed history, and altered its trajectory in redemptive and powerful ways. I’m pretty sure that’s always the case…(Or maybe it’s just me.)

I don’t think so.

Every woman’s story links to another. We are never alone in our hardship, our challenges, or our choices. We are bound – you and me, all of us, past and future. One crossroad crossed, enables another to do the same. One cliff stared down and jumped from, strengthens someone else. One woman’s decisions are not inconsequential. They are what empower us to make ones we cannot yet imagine. Which means that it’s worth it. Always. Every time.

Recognizing and calling on this connection to every woman who has gone before is what allows you to trust that wisdom does, without question, dwell within. Within you! You can trust it – all the time, and definitely in circumstances that require a decision, a direction, an answer:

Sometimes ‘no’ is the right thing to say.
Do not compromise.
Choose yourself – always – no matter what.

Should you still wonder if you have it in you to follow this wisdom, this advice, here’s one more thing to ponder: you’re not only accompanied by a queen, you are royalty yourself. The line of women from whom you descend give you the strength, the courage, and a bloodline that cannot be weakened. So rise up. Leap off and over the cliff. Do not fear: we are here to catch you, if you fall. But even more, we are here to watch you soar – knowing that we are now able to do the same.

‘Seems like the way to start a new week…a Sunday sermon, of sorts.

[Attribution to the ancient, sacred story of Queen Vashti for my inspiration – and hopefully yours.]

Photo by Einar Storsul on Unsplash